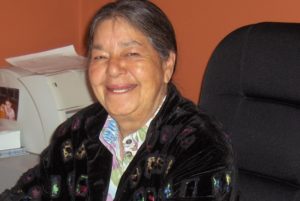 “I send my condolences to the family of Georgina Thompson and also to the community of Sheguiandah,” says Deputy Grand Chief Hare.  “She was a language carrier and a member of the Miidewin Lodge.

Thompson served as Chief three times in Sheguiandah, as well as three terms as councillor.

A traditional funeral will take place at her brother Norman Augonie’s home on Wednesday, April 11